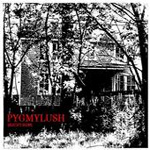 For those perplexed by the direction the Black Heart Procession took after their first three albums, here’s a good place to start: the second full-length from Virginia’s oddly-named Pygmy Lush. They’ve done the right thing and trimmed back the vestigial screamo elements and unseemly Tom Waits aping that sat so uncomfortably on their debut and given full rein to the heavy-hearted acoustic plunk and maudlin, hangdog vocals. Sure, there’s a slightly enlivened Bo Diddley shuffle buried in there somewhere, but rather than glaringly detract it’s these odd moments of respite that somehow bring their wounded woes into sharper focus, leaving “Mount Hope” as a whole hanging like an impregnably dark cloud that somehow serves as its own silver lining. (alex deller / collective fanzine)